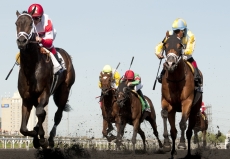 On Sunday at Woodbine, the track will host the 156th edition of the $1 million Queen’s Plate. A prestigious event for three-year-olds foaled in Canada, the race will be contested at a mile and a quarter over the synthetic main track.

Danish Dynaformer has been tabbed as the morning line favorite at odds of 3-1 in the wide open field of fourteen for trainer Roger Attfield. A homebred son of Dynaformer for owner Charles Fipke, the bay colt has won three of his six starts including the Plate Trial last time out. He has had a sharp recent workout in preparation for this race and is scheduled to break from post position seven with Patrick Husbands in the irons for the first time.

Second choice at 7-2 on the morning line is Shaman Ghost for trainer Brian Lynch. Bred and owned by Frank Stronach’s Adena Springs, the bay son of Ghostzapper has won three of his six starts and earned the first graded stakes victory of his career last time out in the Marine Stakes (G3). He has been training steadily at Woodbine since his last win and will have regular rider Rafael Hernandez aboard from the inside post.

Conquest Boogaloo looking for first win of the year

Also in the field at morning line odds of 8-1 is Conquest Boogaloo for trainer Mark Casse. Purchased for $190,000 as a yearling, the dark bay son of Scat Daddy has won two of his seven starts and was a minor stakes winner at Woodbine as a juvenile. He was third in the Plate Trial last time out at double-digit odds. He will have Alan Garcia back aboard and they will break from post position eight as he tries for his first win of the year.