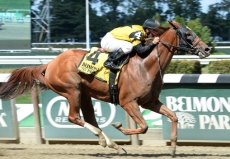 The stakes action at Gulfstream Park on Saturday continues with the $150,000 Florida Sunshine Millions Distaff. Restricted to fillies and mares bred in Florida, Maryland, New York or Pennsylvania, the seven-furlong race has drawn a field of thirteen.

Dame Dorothy has been installed as the morning line favorite at odds of 5-2 for trainer Todd Pletcher. Purchased for $390,000 by celebrity chef Bobby Flay as a yearling, the four-year-old daughter of Bernardini has won four of her five starts. The graded stakes winning filly was last seen finishing third in the Comely (G3) at Aqueduct and will be cutting back to a sprint after four route races. Edgar Prado will be aboard from post position eleven.

Devil's Cave trying to improve off of 2014 runner-up effort

Second choice at 9-2 on the morning line is Devil’s Cave who will be making her first start for trainer Bill Mott. A five-year-old daughter of Put it Back, she has earned two of her four career victories at Gulfstream Park including the Sabin Stakes (G2) last winter. She was second in the 2014 edition of the Florida Sunshine Millions Distaff. She has been training steadily since her last race, a fifth place finish in the Millions Distaff Preview, and will break from post twelve under Joel Rosario.

Also in the field at morning line odds of 8-1 is Toasting for West Point Thoroughbreds. Trained by Tom Albertrani, the five-year-old daughter of Congrats is a five time career winner and was third in the Florida Sunshine Millions Distaff last year. She was last seen finishing third in the Turnback the Alarm Handicap (G3) in October and has been training steadily since then. Javier Castellano  will be back aboard and they will break from post five.