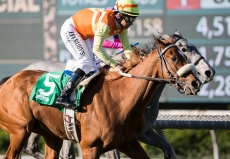 The stakes action will kick off on Saturday at Santa Anita with the 47th running of the $100,000 Senorita Stakes. Carded at one mile on the turf, the Grade 3 has drawn a field of nine three-year-old fillies.

Curlin’s Fox tops the field as the morning line favorite at odds of 5-2 for trainer Carla Gaines. A chestnut daughter of Curlin, she has won two of her four starts and will be trying to earn the first stakes victory of her career. She was last seen winning an optional claiming race over eight rivals and has been training sharply since that effort at Santa Anita. Regular rider Mike Smith will be in the irons and they are scheduled to break from post position four.

Richard Mandella will saddle Avenge as the second choice at 4-1 odds on the morning line. Purchased for $650,000 as a yearling, she has won three of her six starts and will try to earn her fourth consecutive victory. She prevailed by a head in her stakes debut in the Ultrafleet Stakes last time out and will stretch out to a mile for the first time. Flavien Prat will be aboard from post position eight.

Mio Me a longshot heading in the right direction

Also in the field at morning line odds of 15-1 is long shot Mio Me for trainer Mark Casse. A dark bay daughter of Eskendereya, she has one win from seven starts and comes into this race off of a pair of third-place efforts against stakes competition. She will be trying to earn the first black type win of her career and will have Martin Pedroza back aboard from post position five.