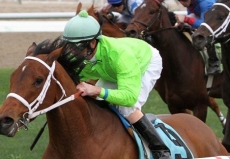 The $125,000 Grade 3 Fair Grounds Handicap February 21 features a field of eleven set to go a mile and an eighth on the turf course in a contentious betting race.

Skyring is the lukewarm 4/1 morning line favorite for trainer Neil Drysdale after finishing fifth, beaten two lengths in the Grade 2 San Gabriel Stakes January 3 at Santa Anita. Skyring, who was trained by D. Wayne Lukas for the majority of his career, will be making his first start out of the Drysdale barn.  The six year-old son of English Channel has made just four starts since December 21, 2013, and will be outfitted with blinkers for the first time.  Hall of Fame jockey Mike Smith has the mount breaking from post ten.

Villandry back to preferred distance

Villandry (9/2) won the Grade 3 River City Handicap at Churchill Downs November 8 at the mile and an eighth distance before finishing sixth in the Grade 3 Colonel Ed Bradley January 17 at nine furlongs.  The David Carroll trainee has won 5 of 19 career starts for earnings of $259,454.  Florent Geroux gets the call from post number two.

Glenard (6/1) will make his North American debut for trainer Graham Motion after racing exclusively in his native Great Britain.  Glenard last raced September 27 at Haydock, finishing seventh in a listed stakes race.  The five year-old gelded son of Arch will receive Lasix for the first time, and takes the blinkers off.  James Graham will take the mount from the rail post.