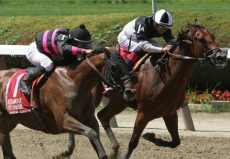 On Thursday at Aqueduct, the featured race is the $100,000 Alex M. Robb Stakes. Restricted to horses bred in New York, the race will be contested at a mile and a sixteenth and has drawn a field of eight colts and geldings.

Empire Dreams has been tabbed as the morning line favorite in the competitive field at odds of 5-2 for trainer Tom Albertrani. A four-year-old son of Patriot Act owned in partnership by West Point Thoroughbreds, the dark bay gelding has been on the board in fourteen of his eighteen starts and is a five-time winner. He is coming out of a third-place finish in the New York Stallion Series Stakes at Aqueduct and will break from the rail under jockey Manuel Franco.

Second choice at morning line odds of 3-1 is Saratoga Snacks for trainer Gary Sciacca. A six-year-old son of Tale of the Cat, he is a nine-time winner and has been on the board in five of his six outings this year. He is trying to rebound after finishing seventh in the Empire Classic Handicap and won this race back in 2012. Angel Arroyo will be in the irons from post position five.

Also in the field at morning line odds of 4-1 is Bullheaded Boy, one of two horses in the race for trainer Todd Pletcher. A three-year-old son of Bullsbay, he was purchased for $115,000 as a two-year-old and has won four of his seventeen starts. He is trying to earn his first black type win and was last seen winning an optional claiming race. Kendrick Carmouche will be aboard from post three.