Conquest Tsunami Gets Another Shot on Dirt in $58,000 Street Sense 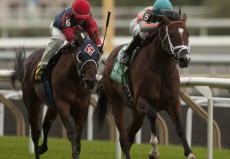 On Sunday at Churchill Downs, the fall meet will begin with the $58,000 Street Sense Stakes. The one mile contest has drawn a field of seven two-year-old colts to compete under the Twin Spires.

Conquest Tsunami tops the field at morning line odds of 2-1 for trainer Mark Casse. Purchased for $190,000 as a yearling by Conquest Stables, the juvenile son of Stormy Atlantic won his first four career starts before finishing sixth to the highly-regarded Carpe Diem in the Breeders’ Futurity. Shaun Bridgmohan will be in the irons for the first time and the colt will be making his second start on conventional dirt from post six.

Second choice at morning line odds of 5-2 is Far Right, a two-year-old son of Notional trained by Ron Moquett. The chestnut colt finished second in his first two starts in the spring and then switched to the care of Moquett and broke his maiden at Churchill Downs in September. He was last seen finishing fourth in the Futurity (G2) at Belmont Park. Ricardo Santana, Jr., aboard for his maiden win, will be back aboard from post two.

Also in the field is Nun the Less at morning line odds of 4-1 for trainer Chris Block. The chestnut son of Candy Ride (ARG), $140,000 purchase as a yearling, will be making his stakes debut winning an allowance race at Keeneland last time out over a field of seven rivals. He broke his maiden over synthetics at Arlington Park two starts back as the favorite. Florent Geroux will remain aboard and they will break from post five.