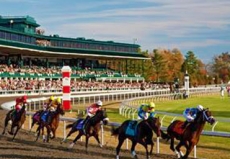 A field of ten is set to contest the Grade 3, $250,000 Commonwealth Stakes April 9 at Keeneland in a seven furlong contest on the main track that shapes up as a stellar betting race.

3/1 morning line favorite Holy Boss will break from post 9 while making his first start since a fourth-place finish in the Breeders' Cup Sprint October 31. The Steve Asmussen trainee had an excellent three year-old season, winning 4 of 8 starts including the Grade 2 Amsterdam Stakes. In his lone try at the seven furlong distance, Holy Boss finished third in the Grade 1 King's Bishop behind eventual sprint champion Runhappy - a rival he would lose to in each of his last three starts. With no Runhappy's in the Commonwealth mix, Holy Boss is a logical contender for the win right off the bench and is a horse to keep an eye on as an improving four year-old.

Ready for Rye troubled last out

Ready for Rye (7/2) is another four year-old who could make some noise in the sprint division. After a successful three year-old campaign, the Thomas Albertrani trainee came turned in a fine four year-old debut February 27 at Gulfstream, finishing third behind the well-regarded XY Jet despite bobbling out of the gate. He earned a respectable Beyer Speed Figure of 100 and should be much tighter this time around for Albertrani who connects at 16% with runners making their second starts off the layoff.

Ami's Flatter (10/1) offers great betting value while returning to the seven furlong distance where he's 2 for 2 in his career. The four year-old posted a monster 105 Beyer Figure two starts back while trouncing allowance foes at his preferred distance.