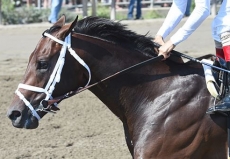 On Saturday at Churchill Downs, the stakes action kicks off with the 91st running of the $200,000 Pat Day Mile, formerly known as the Derby Trial. A one mile contest for three-year-olds, the Grade 3 has drawn a field of eight.

Competitive Edge tops the field as the morning line favorite at odds of 6-5 for trainer Todd Pletcher. Undefeated from three- starts, the bay son of Kentucky Derby winner Super Saver was purchased for $750,000 as a juvenile. He made his sophomore debut a winning one last time out in the Tamarac Stakes at Gulfstream Park as the heavy favorite. John Velazquez will be back in the irons and they are scheduled to break from post position six.

Lord Nelson part of a strong pair for Baffert

Bob Baffert will saddle Lord Nelson as the second choice at 3-1 on the morning line. A chestnut son of Pulpit, he has won three of his seven starts and was last seen finishing second in the Bay Shore Stakes (G3). He has been training sharply at Churchill Downs and clocked a bullet workout last week. Rafael Bejarano will be in aboard and they will break from post position five.

Gimme Da Lute is also in the field for Baffert and he has been tabbed at 7-2 on the morning line. A bay son of Midnight Lute, he has won two of his three starts as the heavy favorite. Both recent victories came against California state-bred competition. He is stretching out to two turns for the first time and will have regular rider Martin Garcia aboard from post position two as he makes his graded stakes debut.