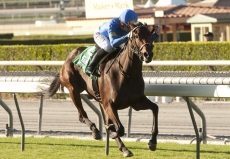 On Saturday at Santa Anita, the featured race is the $200,000 Santa Ana Stakes. Restricted to fillies and mares, the Grade 2 event will be run at a mile and an eighth on the turf and has drawn a field of six.

Her Emmynency has been tabbed as the morning line favorite in the competitive field at odds of 2-1 for trainer Kristin Mulhall. A four-year-old daughter of Successful Appeal, she has been on the board in six of her eight starts and will be trying to earn her fifth career victory. She was a Grade 1 winner at three and will be making her second start since returning off of a four month layoff. She was fourth in the Buena Vista Stakes (G2) and will have Joe Talamo aboard from the rail.

Second choice at morning line odds of 5-2 is Nancy from Nairobi (GB) for trainer John Sadler. A five-year-old daughter of Sixties Icon (GB), she is a four-time winner and will be trying to break through and earn her first graded stakes victory. She is coming into this race off of two consecutive allowance victories, both of which came at Santa Anita. Abel Lezcano will be aboard and they will break from post two.

Also in the field at morning line odds of 7-2 is Glory for trainer Jerry Hollendorfer. A four-year-old daughter of Tapit, the bay filly has been on the board in eight of her eleven starts and is a three-time winner. She will be trying for her first black-type victory and is stepping back up to stakes competition after finishing second in an optional claiming race. Mike Smith will be aboard from post position five.