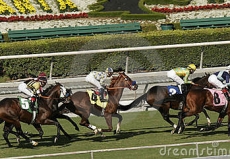 The 63rd running of the Grade 2, $200,000 Palos Verdes is the first leg of a stakes-heavy late pick four Saturday, January 31 at Santa Anita.

Kaigun is the 5/2 morning line favorite in the field of nine.  The old pro has recorded 5 wins in 18 starts for trainer Mark Casse, including a victory last out in the Grade 2 Seabiscuit Handicap November 28 at Del Mar.  Kaigun has career earnings of $964,220 and has run in nine consecutive grades stakes events.  Corey Nakatani, who was aboard in the Seabiscuit has the mount breaking from post four.  In Kaigun’s only other start over the Santa Anita turf course he finished tenth in the 2014 Breeders’ Cup Turf Mile.  The five year-old gelding has worked sharply over the local green for his return.

Another seasoned veteran, Za Approval, is the second choice at odds of 3/1.  The seven year-old gelding has amassed career earnings of over $1.2 million, winning 8 of 24 career starts.  Za Approval will also race out of the Mark Casse barn after spending the bulk of his career in the care of trainer Christophe Clement.  Za Approval ran fourth at Gulfstream Park last out in the Grade 2 Fort Lauderdale - his first start for Casse.  Mike Smith has the call breaking from post eight.

Home Run Kitten, also 3/1, finished second December 26 in a Grade 2 stakes event at Santa Anita.  The David Hoffmans trainee looks to be in career-best form and has recorded four wins, two seconds, and a third in eight starts over the Santa Anita turf.