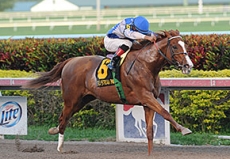 The $150,000 Hal’s Hope kicks off the pick 5 January 10 at Gulfstream Park, and features a talented group of six older horses set to contest the one mile event on the main track.

The race marks the return of 9/5 favorite Lea, who has been away since February after winning the Grade 1 Donn Handicap in impressive fashion at Gulfstream.  Prior to last year’s Donn triumph Lea won the 2014 Hal’s Hope showing an obvious affinity for the local surface.  Trainer Bill Mott connects with just 11% of his runners returning from layoffs greater than 180 days, but Lea appears to be working steadily at Payson Park.  Jockey Joel Rosario has the mount breaking from the rail post.

The one to bet

2/1 second choice Valid is the horse to beat following a narrow defeat in the December 13 Harlan’s Holiday at Gulfstream where he earned a sizzling Beyer Speed Figure of 111.  The five year-old gelding won the Grade 2 Monmouth Cup last summer posting a 110 Beyer and has seven triple digit Beyer Speed Figures in his career.  Valid, trained by Marcus Vitali, has three wins and two runner-up finishes in five starts at Gulfstream, and has excellent tactical speed.

Confrontation (6/1) could prove to be the value play in the field, and is lightly raced enough to show drastic improvement.  The Barclay Tagg trainee finished second in the Grade 2 Bold Ruler October 25 and will be making his first start since that effort.