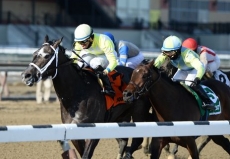 On Saturday at Aqueduct, the featured race is the $400,000 Gotham Stakes. The Grade 3 event offers points towards a spot in the Kentucky Derby (G1) and will be contested at a mile and a sixteenth on the main track.

Topping the field of eight colts and geldings as the favorite is Shagaf at odds of 3-1 for trainer Chad Brown. A homebred son of Bernardini for Shadwell Stable, the bay colt is undefeated from two starts and will be making his stakes debut. He broke his maiden at Aqueduct in November and followed that up with an allowance win at Gulfstream Park in his first start of the year. Irad Ortiz, Jr. will be aboard and they will break from post position two.

Second choice at morning line odds of 7-2 is Sunny Ridge for trainer Jason Servis. A gray son of Holy Bull bred and owned by Dennis Drazin, the gelding has been on the board in five of his six starts and is a three-time winner. After a pair of runner-up efforts, he broke through and earned his first graded stakes victory last time out in the Withers Stakes (G3). Manuel Franco will be aboard and they will break from post position seven.

Also in the field at morning line odds of 5-1 is Rally Cry, one of two horses in the race for trainer Todd Pletcher. A dark bay colt from the first crop of champion Uncle Mo, he will be stepping up to stakes competition for the first time and has one win from three starts. He broke his maiden two starts back and was last seen finishing third in an optional claiming race. Junior Alvarado will be aboard and they will break from the outside post.