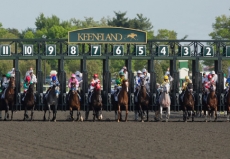 On Sunday at Keeneland, the featured race is the $150,000 Beaumont Stakes. Restricted to three-year-old fillies, the Grade 3 event will be contested at seven furlongs on the main track and has drawn a field of five.

Kinsley Kisses has been installed as the morning line favorite at odds of 9-5 in the compact field for trainer Todd Pletcher. A chestnut daughter of Congrats, she was purchased for $200,000 as a yearling and is undefeated from two starts. She is stepping up to stakes competition for the first time and was last seen winning an allowance race at Tampa Bay Downs. John Velazquez will be in the irons and they are scheduled to break from post position three.

Second choice at morning line odds of 2-1 is Lightstream for trainer Brian Lynch. A bay daughter of Harlan’s Holiday, she went for $55,000 as a yearling and will be making her stakes debut and first start against winners. She broke her maiden at first asking last time out at Gulfstream Park and pulled a mild upset at odds of 7-1. Julian Leparoux will be aboard and they will break from the rail.

Also in the field at morning line odds of 4-1 is Nickname for trainer Steve Asmussen. A dark bay daughter of Scat Daddy, she has an experience edge over several rivals and has been on the board in four of her six starts. She is coming out of a runner-up effort in the Honeybee Stakes (G3) at Oaklawn Park and will break from the outside post under jockey Javier Castellano.