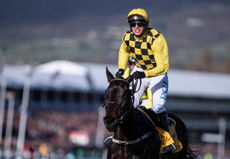 The 2021 Cheltenham Gold Cup happens Friday, March 19. A Grade 1 National Hunt race covering 3 miles, 2 furlongs, and 70 yards, its tradition as one of the best races of the jumps season dates back to 1924. Al Boum Photo is favored to win his third straight edition, though it will be no easy test.

Click here if you have any doubts on how to bet on horses.

The field for the 2021 Cheltenham Gold Cup includes:

Let's have a look at the prices for the Cheltenham Gold Cup runners.

Trainer Willie Mullins has won the Cheltenham Gold Cup the last two years with Al Boum Photo. He returns favored. The nine-year-old has only raced once since winning the Festival feature last year, but that was a 19-length victory in the Savill's New Year's Day Chase (G3). He aims to be the first three-time Gold Cup winner since Best Mate in 2002-2004.

Trainer Nicky Henderson's top hope for a third Gold Cup win is Champ. He won the RSA Insurance Novices' Chase (G1) at the Cheltenham Festival last year. He had wind surgery and spelled after that, but his return in the Betfair Game Spirit Chase (G2) on February 21 was a smart second behind Sceau Royal.

A Plus Tard Improving

A Plus Tard finished third in the Ryanair Chase (G1) last year at the Cheltenham Festival and has returned well this season. The Henry de Bromhead trainee missed by half a length in the Tote Fortria Chase (G2) November 8, then rallied to win the Savills Chase (G1) December 28 by half a length over Kemboy.

Royale Pagaille only achieved his first win over fences at Haydock on December 2. The Venetia Williams charge won a handicap on December 27, then trounced his foes by 16 lengths in the Peter Marsh Handicap Chase (G2) on January 23. He faces his toughest challenge yet in the Cheltenham Gold Cup.

Santini came within a neck of spoiling Al Boum Photo's Cheltenham Gold Cup repeat last year. The Nicky Henderson charge has not won in three starts since his close call at Cheltenham, and most recently ran third in the Virgin Bet Cotswold Chase (G2) February 6.

Lostintranslation, third last year, pulled up in the Ladbrokes King George VI Chase (G1) on December 26. After wind surgery, he returned to run fifth behind Frodon in the Betfair Denman Chase (G2) on February 21.

The last 21 winners of the Cheltenham Gold Cup have been under age nine, and ages seven to nine make up the sweet spot. Most of the field is in the 7-9 range, though Native River (11), Black Op (10), and Aso (11) are on the older side.

It also matters to look at horses who do well at Cheltenham. Al Boum Photo has won the Gold Cup twice, and Native River is also a Gold Cup winner. Frodon has won six times at Cheltenham as well, and Champ and Minella Indo are also Festival winners.

Al Boum Photo will take beating in this spot, though longshot Frodon is a Cheltenham specialist in fine fettle. Champ is another improving sort, and Native River's last start suggests he can turn back the clock.