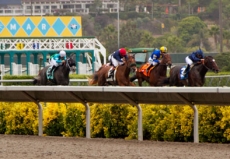 On Saturday at Del Mar, the featured race is the $75,000 Kathryn Crosby Stakes. Restricted to fillies and mares, the race will be contested at a mile and a sixteenth on the turf and has drawn a field of eight.

Chaulk O Lattey tops the competitive and wide open field as the morning line favorite at odds of 3-1 for trainer Richard Baltas. A four-year-old daughter of Silic (FR), she has been on the board in seven of her nine starts and is a four-time winner. She is trying to move forward and earn the first stakes victory of her career and was last seen winning an optional claiming race at Santa Anita. Rafael Bejarano will be aboard and they will break from post position seven.

Second choice at morning line odds of 7-2 is Three Hearts, one of two fillies in the race for trainer Neil Drysdale. A five-year-old daughter of Hat Trick (JPN) bred and owned by Team Valor, she has won three of her nine starts and was a graded stakes winner last year. She has gone winless from four starts this year and is trying to rebound after a seventh-place effort in the Stars and Stripes Stakes (G3) at Arlington Park. Joe Talamo will be aboard from post two.

Also in the field at morning line odds of 6-1 is Cast in Silver for trainer Jerry Hollendorfer. A four-year-old City Zip, she is a half-sister to Grade 1 winner Palace Malice and has been on the board in eight of her eleven starts with three victories. She is trying to earn her first black type victory and was second in the Swingtime Stakes last time out. She will have Martin Garcia in the irons and they are scheduled to break from post position four.