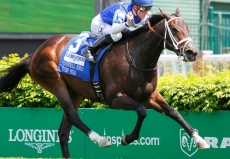 On Saturday at Keeneland, the featured race is the $350,000 Jenny Wiley Stakes. Restricted to fillies and mares, the Grade 1 event will be run at a mile and a sixteenth on the turf and has drawn a field of ten.

Champion Tepin headlines the field as the morning line favorite at odds of for trainer Mark Casse. A five-year-old daughter of Bernstein, she has won nine of her seventeen starts and capped off her Eclipse Award winning season last year with a win in the Breeders’ Cup Mile (G1) over male rivals. She has won both of her starts this year and was last seen winning the Hillsborough Stakes (G2) at Tampa Bay Downs. Regular rider Julian Leparoux will be aboard and they will break from post eight.

Second choice at morning line odds of 6-1 is Wekeela (FR), one of two fillies in the race for trainer Chad Brown. A four-year-old daughter of Hurricane Run (IRE), she has won three of her eight starts and will be making her North American debut and first start since finishing fourth in the Prix de l’Opera (G1) at Longchamp in France. She has been training steadily and will have Gary Stevens aboard from post position six.

Tiger Ride a threat on any surface

Also in the field at morning line odds of 10-1 is Tiger Ride for trainer Graham Motion. A four-year-old daughter of Candy Ride (ARG), she is a homebred for Dixiana Farms and has won half of her ten starts and has been successful on both dirt and turf. She was last seen finishing second in the Inside Information Stakes (G2). Edgar Prado will be in the irons and they will break from the outside post.