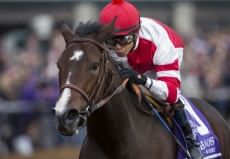 On Saturday at Santa Anita, the featured race is the $100,000 San Ysabel Stakes. Restricted to three-year-old fillies, the Grade 3 will be held at a mile and a sixteenth on the main track and has drawn a field of ten.

Songbird has been tabbed as the overwhelming morning line favorite at odds of 1-9 for trainer Jerry Hollendorfer. She has the distinction of being the shortest priced morning line favorite since champion Zenyatta. Undefeated from five starts, Songbird capped off her Eclipse Award winning juvenile season with a victory in the Breeders’ Cup Juvenile Fillies (G1) and was last seen winning the Las Virgenes Stakes (G2). Mike Smith will be aboard and they will break from post positon six.

Land Over Sea trying to turn the tables on Songbird

Second choice at morning line odds of 12-1 is Land Over Sea for trainer Doug O’Neill. A chestnut daughter of Bellamy Road, she has been on the board in five of her six starts and will be trying to earn her second career victory and first black type win. She was last seen finishing second behind Songbird in the Las Virgenes Stakes (G2) and will have Mario Guttierez aboard from post two.

Also in the field at morning line odds of 30-1 is longshot Jade Princess for trainer Bob Baffert. A gray daughter of Tapit, she was purchased for $775,000 as a yearling and has won two of her five starts. She will be trying to rebound after a fifth-place effort in the Las Virgenes Stakes (G2) last time out and won an optional claiming race two starts back. Rafael Bejarano will be aboard from post position eight.