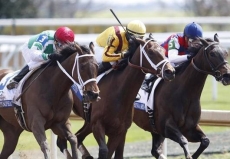 The graded stakes races will continue on Kentucky Oaks Day at Churchill Downs with the $200,000 Eight Belles Stakes. The Grade 2 event has been carded at seven furlongs on the main track and has drawn a field of eight three-year-old fillies.

Carina Mia has been installed as the favorite on the morning line at odds of 8-5 for trainer Bill Mott. Originally pointed towards the Kentucky Oaks (G1), she was excluded from the overflow field due to a lack of points. She has two wins from four starts and will be trying to rebound after finishing fourth in the Ashland Stakes (G1). Her lone graded stakes win came at Churchill Downs as a juvenile. Julian Leparoux will be aboard from post position five.

Second choice at morning line odds of 3-1 is Nickname, one of two fillies for trainer Steve Asmussen. A dark bay daughter of Scat Daddy, she has been on the board in five of her seven starts and is trying to earn her third victory. She has been second in all three starts this year, most recently the Beaumont Stakes (G3). Javier Castellano will be in the irons and they will break from the outside post.

Also in the field at morning line odds of 8-1 is Jade Princess for trainer Bob Baffert. A gray daughter of Tapit, she was purchased for $775,000 as a yearling and has two wins from six starts. She will be trying to earn her first stakes victory and is coming out of a fourth-place finish in the San Ysabel Stakes (G2). Victor Espinoza will be aboard from post position two.