Capping Ahead: BC Sprint Thoughts 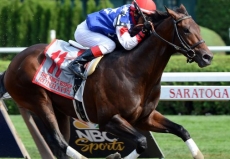 When post positions are drawn Monday, October 26 for the 2015 Breeders' Cup races, the handicapping process for the biggest two days of wagering in North America begins in earnest.  The BC Sprint is an excellent example of a race where pre-formulated opinions will need closer examination in the past performances. The Sprint will feature a lightly-raced, but brilliant three year-old named Runhappy against an accomplished veteran in Private Zone. They will almost assuredly be the first two betting choices. Both do their best running on the lead. Which horse gets it? Will they hook up early setting the table for a closer? Can Runhappy become just the seventh three year-old to win the sprint since its inception in 1984? For my money, Runhappy ends up winging it on the front, provided nothing unexpected happens at the break.

Another three year-old flying under the radar

But, as bettors ponder this decision, let's allow ourselves to slip briefly into the allure of imagining the possibility of a juicy longshot in the sprint. Limousine Liberal will be sent to post at double digit odds - and possibly as high as 20/1. Also a three year-old, this Ben Colebrook-trained colt finished second to Runhappy in the King's Bishop at odds of 15/1. He was no match for the winner that day, but did hold well to finish a clear second. Limousine Liberal has trained explosively at Keeneland - where the horse is based - for several months and just might pull off the upset.

Two more contenders that warrant a closer look are Holy Boss and Masochistic. The latter is a three year-old based on the east coast for trainer Steve Asmussen, while the former is a five year-old gelding who will ship in from California for Ron Ellis. With both having suffered back to back losses in their last two starts, they will be available at generous odds. Either horse is capable on his best day - particularly if a taxing duel between Runhappy and Private Zone develops in the early stages of the race. Runhappy and Private Zone are legitimate stars who will be deserving consumers of wagering dollars in the sprint, but exotic bettors and longshot players are well-advised to consider other options.