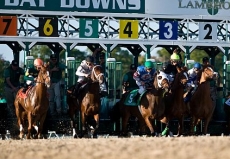 On Saturday at Tampa Bay Downs, the stakes action will begin with the $100,000 Sandpiper Stakes. Restricted to two-year-old fillies, the six furlong contest has drawn a field of nine.

Old Valyria headlines the wide open field as the morning line favorite at odds of 5-2 for trainer Jamie Attard. Bred in Ontario, the bay daughter of Old Forester broke her maiden at first asking at Woodbine over their synthetic main track. In her next start, she finished second in an allowance race and will be making her stakes debut and trying conventional dirt for the first time. Ron Allen, Jr. will be in the irons and they will break from post position eight.

Second choice at morning line odds of 3-1 is Kandoo, one of two fillies in the race from the barn of trainer Ralph Nicks. A chestnut daughter of Kantharos, she has been on the board in three of her four starts and has two victories. She is stepping back up to stakes competition in search of her first black type victory and won an allowance race last time out at Gulfstream Park West. Tyler Gaffalione will be aboard from the inside post.

Also in the field at morning line odds of 5-1 is Hidden Treat for trainer Arnaud Delacour. A homebred for Roy and Gretchen Jackson’s Lael Stables, the bay daughter of Lemon Drop Kid will be making her first start against winners after she broke her maiden in her career debut at Laurel Park last time out. In that race, she was on the lead and won as the favorite. Daniel Centeno will be aboard and they will break from post two.