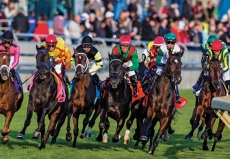 A top-flight field of nine are expected to go the gate for the Pattison Canadian International at Woodbine on Sunday, and it's a race loaded with Grade 1 and Group 1 winners representing five different nations. Favored in the morning line at odds of 5-2 is Irish-bred Idaho, who will be ridden by jockey Ryan Moore, who will be going for his fourth consecutive Canadian International win. He was third in the Epsom Derby earlier this summer, and has a Group 2 win two starts back. Last out he was favored in the Group 1 St. Leger, but stumbled while on the lead and unseated his rider. He gets first-time lasix for his North American debut.

Third choice in the ML is the UK-bred Dartmouth at 7-2. Owned by Queen Elizabeth II and trained by three-time Canadian International winner Sir Michael Stoute, he's 7-for-14 lifetime, including three straight recent wins at the Group stakes level. He also gets first-time lasix. For the home side, Florida-bred World Approval (8-1) has been in the money in six-of-seven starts this year, including a win in the (G1) United Nations. He's expected to be on or near the lead early, and it might just be a question of how far he can go in this 1 1/2 mile event. In what is shaping up to be an excellent betting race, German-bred Protectionist (3-1) is a world-traveller who won the Melbourne Cup in 2014, fell off the map last year, but has recently bounced back with three straight wins on his home turf.