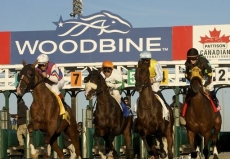 On Sunday at Woodbine, the featured race is the $200,000 Autumn Stakes. Scheduled to be run at a mile and a sixteenth on the all-weather main track, the Grade 2 event has drawn a field of nine colts and geldings.

Lukes Alley tops the field as the morning line favorite at odds of 5-2 for trainer Josie Carroll. Bred and owned by Eugene Melnyk, the five-year-old son of Flower Alley was the Sovereign Award winner as Champion Older Horse in 2014 and the graded stakes winner has won seven of his eleven starts. He returned off of a ten-month layoff this year to win an allowance race and was second in the Durham Cup Stakes (G2) in his next start. Luis Contreras will be aboard from post position seven.

Second choice at morning line odds of 3-1 is Golden Sabre for trainer Malcolm Pierce. A five-year-old son of Medaglia d’Oro, he is out of a multiple stakes winning mare and has been on the board in seven of his twelve starts. Bred and owned by Sam-Son Farm, he earned his first graded stakes victory last time out in the Durham Cup Stakes (G2).  Emma-Jayne Wilson will be aboard and they will break from post position eight.

Royal Son trying to rebound second off the bench

Also in the field and a longshot at morning line odds of 15-1 is Royal Son for trainer Todd Pletcher. A three-year-old son of Tiznow, he has won two of his eight starts and will be trying for his first graded stakes victory. He returned off of a five-month layoff to finish fifth in an allowance race at Keeneland last time out and will try to move forward. Justin Stein will be in the irons and they are scheduled to break from post position three.