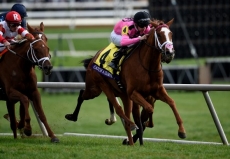 On Thursday at Keeneland, the featured race is the $125,000 Appalachian Stakes. Restricted to three-year-old fillies, the Grade 3 has been carded at one mile on the turf and has drawn a field of eleven.

Catch a Glimpse headlines the field as the heavy favorite on the morning line at odds of 6-5 for trainer Mark Casse. A chestnut daughter of City Zip, she has won four of her five starts and capped off her juvenile season last year with a victory over the Keeneland lawn in the Breeders’ Cup Juvenile Fillies (G1). She was last seen winning the Herecomesthebride Stakes (G3) in her sophomore debut. Florent Geroux will be in the irons and they will break from post position eight.

Second choice at morning line odds of 4-1 is Ava’s Kitten for trainer Chad Brown. A homebred daughter of Kitten’s Joy for Ken and Sarah Ramsey, the chestnut filly has been on the board in three of her five starts and is aiming for her third victory. She will be trying to improve after finishing fifth in the Florida Oaks (G3) in her first start of the year. Javier Castellano will be aboard and they will break from post five.

Also in the field at morning line odds of 10-1 is Spinamiss (IRE) for trainer Todd Pletcher. A bay daughter of Lilbourne Lad (IRE), she has been on the board in four of her five outings and is a two-time winner. She made her North American debut with an allowance win at Tampa Bay Downs and was last seen finishing second in the Sweetest Chant Stakes (G2). John Velazquez will be aboard from the inside post.