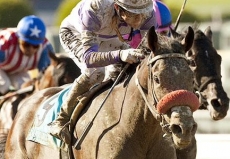 On Saturday at Santa Anita, a field of eight three-year-olds will compete in the $100,000 to try to earn points towards a berth in the Kentucky Derby (G1). The Grade 3 race will be contested at one mile on the main track.

Headlining the field as the morning line favorite at odds of 8-5 is Calculator, one of three horses in the race for trainer Peter Miller. A gray son of In Summation, he remains a maiden from four starts but was second in the Front Runner (G1) behind the highly-regarded American Pharoah and in front of the eventual Breeders’ Cup Juvenile (G1) winner Texas Red. Elvis Trujillo will remain aboard and they will break from post position seven.

Second choice at 7-2 on the morning line is Rockinatten who will be making his first start for trainer Doug O’Neill. A gelded son of High Cotton, the bay gelding is taking on winners for the first time after breaking his maiden in his third career start as the heavy favorite. He has been training steadily in California and will be stretching out to two turns for the first time. Rafael Bejarano will be aboard and they will break from post three.

Pioneerof the West switching to dirt after flop on grass

Also in the field and a longshot at 12-1 on the morning line is Pioneerof the West for trainer Mark Casse. Purchased for $80,000 by John Oxley, the dark bay son of Pioneerof the Nile is trying to rebound after finishing ninth on the turf in the Eddie Logan Stakes. He broke his maiden over synthetics two starts back. Corey Nakatani, aboard for his maiden win, will be back in the irons and they will break from post position two.