Breeders' Cup Winner Lady Eli Back in The $125,000 Appalachian Stakes 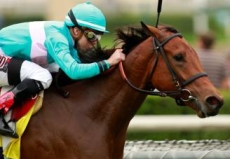 On Sunday at Keeneland, the track will host the $125,000 Appalachian Stakes. Restricted to three-year-old fillies, the Grade 3 race will be contested at one mile on the turf and has drawn a field of seven.

Lady Eli tops the field as the morning line favorite for trainer Chad Brown at odds of 4-5 and will put her undefeated streak on the lawn. Three for three, the dark bay daughter of Divine Park was last seen winning the Breeders’ Cup Juvenile Fillies Turf (G1) and will be making her sophomore debut. She has been training steadily for her return to the races and will have jockey Irad Ortiz, Jr. aboard from post position six.

Wesley Ward will saddle Sunset Glow as the second choice at odds of 5-2 on the morning line. Winner of the first two starts of her career, she will get a rematch with Lady Eli after finishing second in the Breeders’ Cup Juvenile Fillies Turf (G1). A gray daughter of Exchange Rate, she has been training in Kentucky for her first start of the year and will have Joel Rosario in the irons from post position two.

Miss Temple City getting another shot at graded stakes company

Also in the field at morning line odds of 5-1 is Miss Temple City for trainer Graham Motion. A dark bay daughter of Temple City, she will be trying to earn the first graded stakes victory of her career and was last seen finishing third in the Sweetest Chant Stakes (G3) at Gulfstream Park in her first start of the year in January. John Velazquez will be aboard from post position two as she goes for her third win.