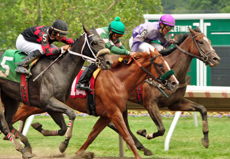 The Breeders’ Cup at Del Mar Racetrack will offer not only the classiest racing in the world but also some of the best betting opportunities of the year! One of the highlights of the meeting is the $4 million Breeders’ Cup Turf (G1). The race features the best turf horses in the world going a mile and a half for one of the most prestigious prizes in horse racing.

Some of the great turf horses who have won the Breeders’ Cup Turf over the years include English Channel, St. Nicholas Abbey, Found, Highland Reel, Enable, and Bricks and Mortar. Who will add their name to this illustrious list? Read on to find out who can win, and how to bet the race.

Choosing an online racebook can be tough, but our experts are here to help. They know about the online horse betting options out there, and they have found the best places to play.They can not only tell you about the best sites for betting, but also about which sites have the best bonuses and incentives for different kinds of bettors.

Once you learn about your options, you can make a confident and profitable choice.

This is the official field for the 2021 Breeders' Cup Turf including post positions, trainers, and jockeys:

Keep in mind that the morning line is just a guess about how the odds will pan out. Your better bet is to check the best online racebooks. When you bet the Breeders’ Cup Turf online, you can lock in your odds before the race and make sure that you can get an overlay on your chosen horse when you see one!

With your betting account at the ready, you are now ready to start handicapping the race!

Defending champion #13 Tarnawa returns, and will almost certainly go off the favorite. Though she does not carry a win streak into the race like last year, she has been facing the best horses in the world and holding her own, including a near miss in the Arc de Triomphe (G1) last time out.

Tarnawa benefits from the scratches. With the defections of United and Domestic Spending, #15 Bolshoi Ballet and #16 Channel Maker draw in, and can join #5 Tribhuvan and #6 Acclimate on the front end. This extra infusion of speed helps the closers immensely, and Tarnawa is the most class-proven of the closing brigade.

The best win bet in the Breeders’ Cup Turf is #7 Walton Street. This is a step up in class from the Canadian International (G1), but he won that confidently and has back form against some of the best horses in the world. For example, two starts back, he finished just a length behind Torquator Tasso, the winner of the Arc.

Walton Street has tactical speed, which should keep him out of any front-end battles but also give him the jump on the real closers, something particularly important on ground this firm. He is also trained by Charlie Appleby, one of the best in the world with shipping horses around the world.

#12 Teona should also be a square price, and also has legitimate claims. She was well beaten three back in the Oaks (G1), but that came over soft going. She has won her next two, including the Prix Vermeille (G1) against older foes, and those wins came over better going. She should take well to the ground at Del Mar and should also be tactical enough to get a jump on the closers.

Two other runners appeal strongly for the exotics, especially with the speed drawn in off the AE list. #11 Gufo is well proven over both the mile and a half and over firm going, and should be in the running late if he runs back to his impressive Sword Dancer (G1) effort. #9 Sisfahan finished just a length behind Arc winner Torquator Tasso two back, and should be rolling late at a price if he can bounce back from his last-out third.