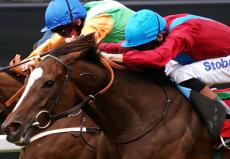 The best turf horses in the world are set to square off in Wednesday's Prince of Wales Stakes (G1) at Royal Ascot. The prestigious race will feature a field of eight and will be run at a mile and a quarter on the turf.

Headlining the field is Treve (FR), installed as the 4-5 favorite by bookmakers. The four-year-old filly will be making her first start outside of France for trainer Criquette Head-Maarek and will be ridden by the popular Frankie Detorri. Last year, Treve defeated top male rivals in the Prix de l'Arc de Triomphe and was second in her only start this year to the veteran Cirrus des Aigles.

Dank and Magician won their turf divisions at 2013 Breeders' Cup

She is not the only filly in the field. World travelers Dank and The Fugue are both formidable opponents. Dank (GB) will be making her first start since a third place finish in Dubai for trainer Sir Michael Stoute. Tabbed at 10-1 with Ryan Moore aboard, the 2013 Breeders' Cup Filly and Mare Turf winner will break inside of Treve in the seven hole.