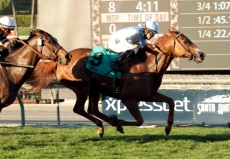 On Sunday at Santa Anita, the featured race is the $100,000 Wilshire Stakes. A Grade 3 race scheduled to be run on the turf, the one-mile contest has drawn a field of eight fillies and mares.

Birdlover (GB) tops the field as the morning line favorite at odds of 5-2 for trainer Doug O’Neill. A five-year-old daughter of Byron (GB), she has won five of her fifteen starts and is a perfect two-for-two this year since returning off of a year-long hiatus. She will be trying to earn the first graded stakes victory of her career and is scheduled to break from the outside post in the wide-open field under jockey Rafael Bejarano.

Richard Mandella will saddle Moulin de Mougin at odds of 4-1 on the morning line. A five-year-old daughter of Curlin, she has won four of her fifteen outings and was a graded stakes winner last year. After going to the shelf in September after falling in the Rodeo Drive Stakes (G1), she returned off of a seven-month break to finish ninth in the Thunder Road Stakes in April. Mike Smith will be in the irons from the rail.

Also in the field at morning line odds of 6-1 is Sky Treasure for trainer Mark Casse. A five-year-old daughter of Sky Mesa with thirteen starts, the chestnut mare is a three-time career winner and will be trying to earn her first graded stakes victory. She has been fourth in both starts this year against stakes competition and is scheduled to break from post position six under jockey Joe Talamo.