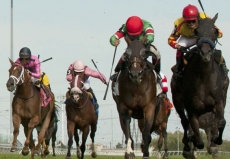 On Sunday, the featured race at Woodbine is the $150,000 Ontario Derby. A Grade 3 event for three-year-olds, the race will be contested at a mile and an eighth on the synthetic main track and has drawn a field of eight colts and geldings.

Billy’s Star has been tabbed as the morning line favorite at odds of 2-1 for trainer Roger Attfield. A bay son of Perfect Soul (IRE), he has won two of his nine starts and will be stepping up to graded stakes competition for the first time after winning the Victoria Park Stakes last time out. He was fourth in the prestigious Queen’s Plate in July. Alan Garcia will be in the irons and they will break from post position seven.

Second choice at morning line odds of 3-1 is Breaking Lucky for trainer Reade Baker. A chestnut colt from the first crop of champion Lookin at Lucky, he has been on the board in three of his seven starts and is a two-time winner. He was ninth last time out in the Breeder’ Stakes but won the Prince of Wales Stakes at Fort Erie two starts back. James McAleney will be aboard and they will break from post positon five.

Also in the field at morning line odds of 4-1 is Firespike for trainer Michael Maker. A bay son of Flower Alley, he was purchased for $70,000 as a juvenile and has won three of his twelve starts. He is a two time stakes winner and will be trying for the first graded stakes win of his career. He was second last time out behind Billy’s Star in the Victoria Park Stakes and will break from post position three under jockey Luis Conteras.