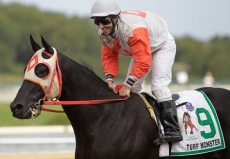 On Saturday, Parx will host the $200,000 Parx Dash Handicap. Scheduled to be run at five-furlongs on the turf, the Grade 3 event has attracted a field of eleven colts and geldings, featuring the three-time defending champion, Ben’s Cat.

Ben’s Cat, the popular nine-year-old gelding, headlines the field as the morning line favorite at odds of 5-2 for trainer King Leatherbury. In addition to winning the last three editions of the Parx Dash (G3), he has won 26 other races and will be trying to earn the 30th victory of his career. He won the Jim McKay Turf Sprint two starts back and was second last time out in the Pennsylvania Governor’s Cup. Regular rider Julian Pimental will be aboard and they will break from post two.

Second choice at 4-1 on the morning line is Bold Thunder for trainer Patricia Farro. A five-year-old son of Bold n’ Flashy, he is a seven-time winner and will be trying to earn the first graded stakes victory of his career. He has won two of his six starts this year and was last seen finishing third in the Pennsylvania Governor’s Cup. Pierre Hernandez Ortega will be aboard from the rail.

Tightend Touchdown attempting to rebound and return to form

Also in the field at odds of 8-1 on the morning line is Tightend Touchdown for trainer Jason Servis. A six-year-old gelded son of Pure Precision, he is a ten-time career winner and was second in this race to Ben’s Cat last year. He has not hit the board from two outings this year and was ninth last time out in the Elusive Quality Stakes. Frankie Pennington will be in the irons from post position five.