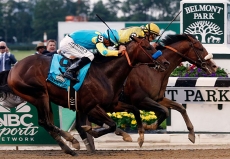 With the Wednesday morning withdrawl of pre-favorite Classic Empire, a field of 12 have drawn into the 2017 Belmont Stakes. The race goes Saturday, June 10 from Belmont Park, with an expected post time of 6:37 PM Eastern.

The Belmont is the featured race of an excellent betting card that includes five other Grade 1 races, and eight graded-stakes races overall. You can bet the full day of racing through an account with Bovada, or one of our other highly recommended racebooks.

Here's how we see the race going down, with post position and Belmont's morning line odds.

#2 - Tapwrit (6-1): He was only 5th and 6th in his last two races, the second of those being the Kentucky Derby. Prior to that he won the (G2) Tampa Bay Derby and ran second in the (G3) Sam F. Davis Stakes. In both of his last two he has had trouble at the gate, and so getting away cleanly will be important.

He didn't draw the best post position, but he's a horse that wants to race mid-pack anyway and saves good energy for the closing 1/4 mile, as he did late in the Derby, despite having to come from farther back than he usually likes. There's expected to be a fairly solid pace up front in the Belmont, and if he can at least stay within a half-dozen lengths of the lead around the final turn, he should come running once they straighten for home.

#7 -  Irish War Cry (7-2): With Classic Empire out, he inherits favored status. He's an enigma, and a horse you are going to either like or completely discount, based on the fact he looked terrific in two wins this year, and terrible in two losses. He looked like a serious threat at the top of the Kentucky Derby stretch, but then gave up the ghost to finish 10th. Even his trainer, Graham Motion, admitted he had no idea why he ran so poorly, but it could just be he got tired of splashing through the Churchill Downs' slop.

He's been off since then and training well, and should get a dry track to run on Saturday. He has good early speed to get into a close stalking position off the leaders, typically what you need to do to win the Belmont.

#8 - Senior Investment (12-1): While late closers rarely win the Belmont, there are a few things to like about this horse to think he could get a part of the money. He won in his second try at the graded-stakes level in taking the (G3) Lexington Stakes, closing two lengths on the leader on the final turn, and then four more as they came through the stretch to win by a head.

He showed a similar ability to close to get up for third in the Preakness Stakes, passing five horses in the last 3/16 of a mile, including Derby runner-up Lookin' At Lee.

# 10 - Multiplier (15-1): Perhaps more of a hunch bet than anything, this horse is a bigger puzzle than Irish War Cry, because on paper he doesn't even belong in the race. While both his sire and dam were Grade 1 winners, they did so sprinting in races of a mile or less. But he doesn't run like a sprinter, he's not particulalry quick out of the gate, and he came on late to win the 1 1/8 mile (G3) Illinois Derby over a highly regarded favorite.

#1 - Twisted Tom (20-1): If you don't like Multiplier at long odds, this one would be an even bigger upset to win. He's taking a big step up to his first graded-stakes try, but he's won two in a row at the lower stakes level, and three straight overall. He likes to be close to the lead early, which would serve him well in the Belmont, but he did draw a terrible post. He has a victory on the Belmont dirt, and trainer Chad Brown and jockey Javier Castellano know how to win on the track.