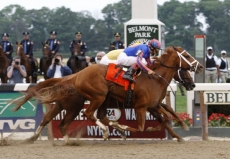 While most will be longshots behind favored Exaggerator, ten or so colts are expected to go to the gate at Belmont Park on June 11 for the Belmont Stakes. Final entries will be taken and post positions will be drawn on Wednesday, June 8th. Of those expected to start, eight have run in either the Preakness or Kentucky Derby, while two others are coming out of the May 14 Peter Pan Stakes at Belmont .

These newcomers to the Triple Crown series are Governor Malibu, runner up in the Peter Pan, and Wild About Deb, who finished third. The winner of the race, Unified, likely reached his distance limits in the 1 1/8 mile race and will probably skip the 1 1/2 mile Belmont. The other two like to come from off the pace as both did to hit the board in the Peter Pan. Prior to that race, Wild About Deb broke his maiden on second try at Santa Anita, winning by six lengths a race that came off the turf. Governor Malibu was DQ'd from first in his previous, the Federico Tesio Stakes at Laurel Park, where he finsihed ahead of Awesome Speed, who next finished ninth in the Preakness.

Creator, Lani and Suddenbreakingnews back to try again

Coming back to the Triple Crown is Creator, who generated some pre-Kentucky Derby buzz off an impressive Arkansas Derby win, but who ran into serious traffic problems at the top of the Derby stretch and could do no better than 13th. He defeated Suddenbreakingnews in the Arkansas, and that one will be here as well, likely second or third favorite after he closed fast on the leaders at the Derby and just missed out on the top three by less than a half-length. Along with Exaggerator, Japan-based Lani will be the only other colt to try all three legs of the Triple Crown. While still not considered a threat to win, he has shown improvement with experience in North America, and could make another move forward.