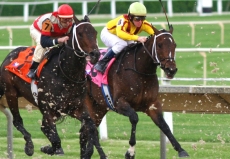 With post positions decided and the field set for the 2016 Belmont Stakes, handicappers must begin developing critical angles for the mile and one half event Saturday, June 11 in Elmont, NY.

In a race with few certainties, it’s still a safe assumption that Kentucky Derby runner-up and Preakness winner Exaggerator will be massively overbet. Listed at 9/5 on the morning line, Exaggerator is more likely to enter the gate at odds of 3/5. Those are unacceptable odds even though we’re talking about the most talented and accomplished runner in the field. Even if we disregard the wide post draw (11) and the fatigue factor of running his third grueling race in five weeks, there are other reasons to be skeptical about the heavy favorite.

For starters, Exaggerator has never recorded extremely impressive Beyer Speed Figures. He won the Grade 1 Santa Anita Derby with a 103 Beyer Speed Figure, followed by a runner-up finish in the Kentucky Derby with a 101, and tallied another 101. Considering that both victories were earned over a sloppy racetrack – something Exaggerator adores – and that all three races were marked by swift early fractions that flattered his closing kick, the favorite will likely finally find himself in a race where the conditions don’t fit his skill set to a tee.

Over a dry track, Stradivari (5/1 ML) gets the nod because of the colt’s excellent tactical speed and the likelihood that he will improve after getting an education facing stakes horses for the first time in the Preakness. It’s doubtful that Exaggerator finishes off the board barring a totally uncharacteristic performance, so let’s look at how to complete a trifecta wager maximizing those opinions. We can key Stadavari on top of Exaggerator and use the all button around those opinions as shown below in Option 1 to give ourselves a chance to catch any messy longshots that might light up the tote board:

In option 2, we can attempt to increase the base wager and cast a smaller net while maximizing our handicapping opinions. Governor Malibu (12/1), Destin (6/1), Suddenbreakingnews (12/1), Gettysburg (30/1) and Seeking the Soul (30/1) look like an appealing group to round out the trifecta as described in option 2 below: