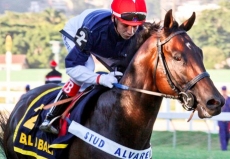 On Saturday at Santa Anita, the track will host the $100,000 American Stakes. Carded at one mile on the turf, the Grade 3 race has attracted a field of eight colts and geldings.

Richard Mandella will saddle Bal a Bali (BRZ) as the morning line favorite at odds of 9-5. A five-year-old son of Put it Back, he has won eleven of his twelve starts in his native Brazil and will be making his first North American start. He has been training steadily for his first start this year. Mandella has campaigned numerous South American starts to North American success and the dark bay colt is scheduled to break from the outside post under jockey Flavien Prat.

Second choice at 5-2 on the morning line is Winning Prize (ARG) for trainer Neil Drysdale. A six-year-old son of Pure Prize, he has won eight of his seventeen starts and was a Grade 1 winner last year in California. After an average effort this year in the Frank Kilroe Mile (G1), he rebounded to run second in the Thunder Road Stakes. Rafael Bejarano will be aboard and they will break from post position three.

Enterprising getting a jockey change to Stevens

Also in the field at morning line odds of 12-1 is Enterprising for trainer Tom Proctor. Bred and owned by Glen Hill Farm, the four-year-old son of Elusive Quality has won five of his twelve starts and is trying to rebound after a tenth-place finish in the Thunder Road Stakes. That was his first start since October and he will get a jockey change to Gary Stevens and they will break from the inside post.