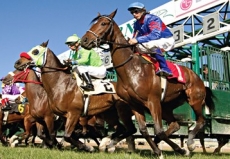 On Saturday at Hawthorne Race Course, the track will host the $150,000 Sixty Sails Handicap. A Grade 3 race scheduled to be run at a mile and an eighth on the main track, the contest has drawn a field of five fillies and mares.

Awesome Flower has been tabbed as the even-money favorite on the morning line for trainer Mike Maker. A six-year-old daughter of Flower Alley, she is an eleven-time winner who has won on turf, dirt and synthetics. The versatile mare comes into this race with three wins from four starts this year and was last seen winning an optional claiming race on the turf at Gulfstream. Miguel Mena will be aboard and they will break from post two.

Yahilwa trying to rebound in second start of the year

Second choice at 3-1 on the morning line is Yahilwa for trainer James Cassidy. A five-year-old daughter of Medaglia d’Oro, she has run primarily in California and has won five times. She is trying to rebound after finishing seventh behind Warren’s Veneda in the Santa Maria Stakes (G2) last time out and has been training steadily since that race. Elvis Trujillo will be aboard for the first time and they will break from the inside post.

Also in the field at morning line odds of 5-1 is Parc Monceau who will be making her first start under the care of Bill Mott. A five-year-old daughter of Giant’s Causeway, she has won five of her sixteen starts and will be trying for the first graded stakes victory of her career. She was second as the favorite against minor stakes company at Delta Downs last time out. She will get a jockey change to Florent Geroux and they will break from post three.