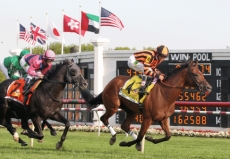 Popular Illinois-bred The Pizza Man is back to defend his title in the 2016 Arlington Million, but he's in double-digits at 10-1 in the morning line against 12 others, including a formidable international cast representing five other countries. The seven-year-old The Pizza Man has had a tough go in 2016, failing to hit the board in three-graded stakes tries.

In a fairly wide-open betting field, Irish-bred Tryster (7-2) has been made the favorite in his North American debut. He had recently run off a string of three straight wins, including a Group 1 win in Dubai in March. After a three-month layoff he came back to run fifth in the Group 1 Prince of Wales at Ascot, and this is his first start since then, where he'll get lasix for the first time. Breaking next to him in the far outside gate will be Deauville (6-1), not the most ideal spot for a colt who does his best running near the front. He comes in off a win over a good field in the (G1) Belmont Derby Invitational, and a repeat should put him in the mix.

Another with the same running style as Deauville is World Approval (4-1), a steadily improving four-year-old who was knocking on the door in Grade 1 races earlier in the year until breaking through with a win last out in the United Nations Stakes at Monmouth. This will be his first time stretching out to 1 1/4 miles. Third in that race was Wake Forest (5-1) a Grade 1 winner back in May and the sixth-place runner in the 2015 Arlington Million.