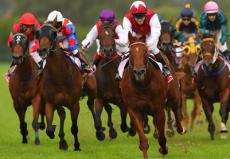 The Arlington Handicap, run at a mile and a quarter, serves as the local prep race for the August 16 Arlington Million.  The race has drawn a field of six with the Kenny McPeek trained War Dancer installed as the 2/1 morning line favorite.  War Dancer is proven at the distance with a win in the 2013 Grade II Virginia Derby to his credit.  In his last two efforts, War Dancer finished a close second in the Grade II Elkhorn at Keeneland before winning the Grade III Louisville Handicap in May.  Both races were run at a mile and a quarter.

Avanzare (7/2 ML), a four year-old gelding trained by Thomas Proctor, is an intriguing contender off a mile and an eighth allowance win at Churchill June 20.  Avanzare has never finished out of the exacta in seven lifetime starts including four wins, but is untried at the Arlington Handicap distance.  Local favorite Mr. Mardi Gras (5/1 ML) is back for trainer Chris Block and will be making his 40th start in a career that has surpassed the million dollar mark for his owners.

Admiral Kitten classes up once again

Admiral Kitten (3-1 ML), trained by Michael Maker certainly passes the class test after making his last ten starts amongst graded company.  He won last year’s Grade I Secretariat Stakes on Million Day,  and is owned by Kenneth and Sarah Ramsey, owners of 2013 Million Champ Real Solution.  Finnegans Wake at 9/2 and Infinite Magic (10/1) round out the field.