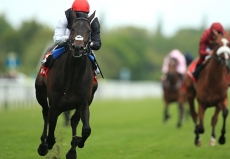 On Saturday at Keeneland, the best turf horses in the world will compete in the $3 million Breeders’ Cup Turf. A Grade 1 event scheduled to be run at a mile and a half, the race has drawn a competitive field of twelve.

Golden Horn (GB) has been tabbed as the heavy favorite at odds of 4-5 for trainer John Gosden. A three-year-old son of Cape Cross (IRE), the bay colt has won seven of his eight starts and is a neck away from a perfect record. Six of those victories have come this year and he was last seen winning the Prix de l’Arc de Triomphe in which he defeated the reigning Breeders’ Cup Turf (G1) champion Flintshire. Frankie Dettori will be in the irons and they will break from the rail.

Second choice at morning line odds of 8-1 is Found (IRE) for trainer Aiden O’Brien. The three-year-old filly will be facing male rivals and has been on the board in nine of her ten starts with three career victories. She has been knocking heads with the boys in Europe and was second last time out in the Qipco Champion Stakes (G1). Ryan Moore will be aboard and they will break from post nine.

Also in the field at morning line odds of 8-1 is Big Blue Kitten for trainer Chad Brown. Owned and bred by Ken and Sarah Ramsey, the seven-year-old ridgling is a son of Kitten’s Joy and is a fourteen time winner. After a narrow defeat in the Arlington Million (G1), he came back to win the Turf Classic Invitational (G1) last time out and will have regular rider Joe Bravo aboard from post seven.