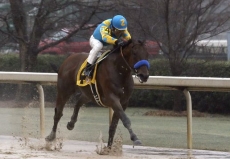 All eyes will be on American Pharoah April 11 in the Grade 1, $1 million Arkansas Derby at Oaklawn Park, as the talented Kentucky Derby hopeful faces seven rivals in the mile and an eighth race.

American Pharoah has been installed as the 1/2 morning line favorite after easily dispatching his foes in the Grade 2 Rebel while making his three year-old debut. The 6 ¼ length victory was the colt’s first start since winning the Grade 1 Front Runner Stakes at Santa Anita September 27.  American Pharoah demonstrated his typical front-running style in the win – his third consecutive since suffering his only career loss in his debut. The Bob Baffert trainee has worked progressively at Santa Anita since the March 14 Rebel and has recorded triple digit Beyer Speed Figures in each of his three career wins.  No other runner in the field has run faster than a 91 Beyer Figure.

Far Right (9/2) is a clear-cut second choice for trainer Ron Moquett after winning the Smarty Jones Stakes and Grade 3 Southwest Stakes in succession. The colt has been freshened since the February 22 Southwest and shows a trio of solid works at Oaklawn for his return. Hall of Fame jockey Mike Smith rode the colt in each of his stakes wins and will be aboard again breaking from post seven.

Madefromlucky (6/1) was no match for American Pharoah in the Rebel, but did manage to run second while earning a career-best Beyer number of 89. John Velazquez returns to ride the colt breaking from post four.