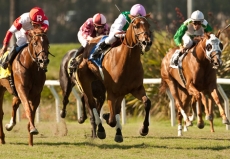 The summer turf racing season gets under way in earnest on Saturday with the $400,000 (G1) American Oaks at Santa Anita. The 1 1/4 mile run for three-year-old fillies has drawn a field of seven, and could provide an preview of the early contenders for next fall's Breeders' Cup Filly & Mare Turf championship. Both the 2013 winner, Emolient and the 2012 American Oaks champ, Lady Of Shamrock, have since made two starts in the prime distaff race at the BC, with Emolient finishing 4th in 2013.

Favorite has a graded-stakes win over the course

The morning line favorite for Saturday's race is Cal-bred Spanish Queen (2-1), who went unraced as a two-year-old, but who has won 2-of-3 this year, including the (G2) Honeymoon Stakes on the Santa Anita turf last out. Prior to that, she was second, beaten only by a neck, in the (G3) Providencia, also at Santa Anita. Second choice in the ML at 5-2 is one of two Chad Brown entries in the the form of Mrs. McDougal, also 2-for-3 lifetime, who will be making her stakes debut following a 7 1/4 length romp at a mile on the turf at Aqueduct.

The other Chad Brown horse is 3-1 Consumer Credit, who has finished first or second in six straight starts following her career bow. Included in those is a win in the (G3) Sweetest Chant Stakes at Gulfstream, and runner-up placing in the (G3) Florida Oaks. Although the winner, she struggled a bit against a small field in her last, on a yielding Aqueduct course. At 4-1 Feathered has had some results in the past facing Grade 1 company on dirt, including a fourth-place finish in last year's BC Juvenile Fillies. She moved to turf last out to win the (G3) Edgewood Stakes going away.