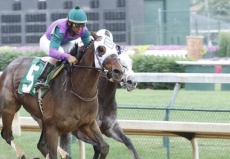 The $80,000 Bet On Sunshine Stakes immediately precedes the Grade 3 Cardinal Handicap Saturday, November 21 at Churchill Downs as a field of nine sprinters is scheduled to line up to contest the six furlong event on the main track.

Alsvid, the 5/2 morning line favorite, was a non-factor in his last two starts, but those included the Grade 1 Breeders’ Cup Sprint and Grade 3 Phoenix – both of which featured the likes of Run Happy, an essential lock for champion sprinter. Alsvid has one win from five starts this year, recording an impressive performance en route to winning the Grade 3 Aristides Stakes May 30 at Churchill over 2014 Breeders’ Cup Sprint champ Work All Week. Alsvid, trained by Chris Hartman, has won 13 of 34 career starts for over $1 million in career earnings.

Tsunami working up a storm at CD

Conquest Tsunami (3/1) returned in September from nearly a ten month layoff and finished poorly after dueling for the lead in a minor stakes event at Belmont Park. The Mark Casse trainee should be much improved after a pair of blistering workouts over the Churchill Downs surface on November 1 and November 15. Both moves were bullet works and the three year-old colt will be reunited with winning jockey Shaun Bridgmohan.

Bagg O’Day (6/1) has been a consistent horse over his 16-race career with four wins, four seconds, and one third-place effort. If things heat up on the front end as expected, the Steve Hobby trainee could make a late run in the stretch with Joe Rocco in the irons.