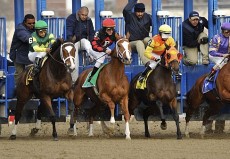 On Saturday, Pennsylvania’s breeding program will be showcased in the $75,000 Plum Pretty Stakes. Restricted to state-bred fillies and mares, the mile and a sixteenth race has attracted a field of ten.

Topping the field at morning line odds of 5-2 is Lenape Rim, a multiple stakes winner with over $500,000 in earnings. Trained by Michael Salvaggio, the six-year-old daughter of Rimrod will have Josean Ramirez aboard after the pair finished second in the Mrs. Penny Stakes last time out. She has won two of her five starts this year and is returning to dirt after racing primarily on turf and synthetics recently. She will break from post six.

Primo Via going for first stakes win of career

Second choice on the morning line at odds of 5-2 is Primo Via for trainer Philip Aristone. A five-year-old daughter of Candy Ride, the five-year-old mare is going for the first stakes win of her career and has won ten times, five of which have come this year. Regular rider Eriluis Vaz will be in the irons and they will break from post eight. She was last seen finishing second against optional claiming competition.

Also in the field at odds of 3-1 is Maybe Tonight for trainer Ben Perkins, Jr. Bred and owned by Jersey Shore Racing Stable, the four-year-old filly was last seen winning the Jersey Girl Handicap at Monmouth Park. She has been on the board in all but one of her seven starts this year and will be making her first start at Parx after racing primarily in New Jersey and Maryland. Angel Serpa will be aboard from post five.