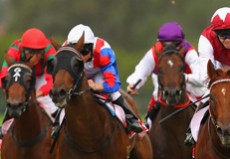 Del Mar’s inaugural Bing Crosby Season features a single stakes race on the opening Saturday card November 8 –  the $75,000 Let It Ride for three year-olds going one mile on the turf.

The field of nine is led by 7/2 morning line favorite Awesome Return who won the Snow Chief Stakes and Silky Sullivan Stakes in succession before finishing third in an allowance optional claiming event at Del Mar in his last start.  The three year-old son of Decarchy is trained by Mike Puype and has won three of eight lifetime starts for earning in excess of $270,000.   The Let It Ride will mark Awesome Return’s first start since July 19 and just his third start since April 26.

Cabral (4/1) tried grade 3 company last out in the Hill Prince Stakes at Belmont October 4.  That start was his first in the United States after beginning his career with seven races in France.  Cabral finished ninth in the Hill Prince for trainer Leonard Powell after never finishing worse than fourth overseas.  Jockey Corey Nakatani will be aboard the son of Henrythenavigator who should show improvement with his second start stateside and with the much-needed class relief.

Another foreign invader, Maibaby (5/1), will be making his first start in the U.S. for trainer Neil Drysdale after posting two wins in six starts in France.  Bred in Ireland, Maibaby is a son of former Breeders’ Cup Turf winner Hurricane Run and will receive the services of European jockey Kieren Fallon.