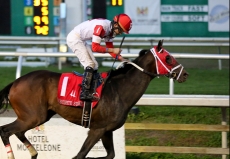 Despite nine stakes races on the Louisiana Derby card March 26 at Fair Grounds, another derby - the $75,000 Cresent City Derby for three year-old state-bred horses - will still hold plenty of intrigue for bettors as a full field of 13 will head postward in the mile and one sixteenth event on the main track.

Icy Gentleman is the lukewarm 7/2 morning line favorite for trainer Henry Johnson after a pair of dominant stakes wins at Delta Downs. The three year-old son of Yankee Gentleman has been impressive in his last two starts, winning by a combined 12 1/4-lengths, but lost both starts at Fair Grounds in December. With 4 wins in 8 starts, the upward mobility of Icy Gentleman must be gauged against the gelding's willingness to run away from Delta. Handicappers wrestling with the question of whether the favorite is much-improved or simply a horse-for-course, aren't likely to get any answers until the gates open as the enigmatic choice has not worked out over the Fair Grounds dirt in preparation.

The Brad Cox-trained Extra Credit is an intriguing surface-switcher at 8/1. A third-place finisher last-out in a listed stakes race at Fair Grounds on the turf, Extra Credit has the right running style to be a factor in the lane if able to take to the dirt. Cox connects at a stellar 21% with the move, so there's reason to believe Extra Credit could be moving best in the lane in a race loaded with early speed.

Mageez (9/2) is another logical contender after posting a solid win against optional claimers going a mile at Fair Grounds February 18. The Ronda Hutchinson trainee has been freshened for this effort and clearly has an affnity for two-turn races at Fair Grounds where he's 2 for 2.