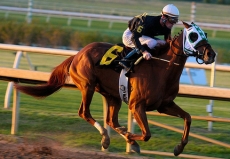 The $75,000 Auld Lang Syne Stakes December 30 at Parx has attracted a competitive field of nine set to go one mile and seventy yards on the main track.

Chad Brown trains the 5/2 morning line favorite, Easter Gift, who last ran in the Grade 1 Clark Handicap at Churchill Downs November 28.  In that race, the five year-old son of Hard Spun suffered an awkward start on never got on track, finishing fifth against the talented field.  The Auld Lang Syne figures to be a much easier spot for Easter Gift, who has shown an affinity for Parx winning all three of his local starts.  Jockey Irad Ortiz has the mount on Easter Gift  after Joel Rosario had ridden the colt in four of the last five races.

Adirondack King (5/1) is another horse that has run well over the Parx surface.  In 13 career starts at Parx, Adirondack King has five wins, two seconds and a third place finish.  In his last three starts, Adirondack King has twice recorded Beyer Speed Figures of 97, which make him a prime contender in this field.  The John Servis trainee, however, enters the Auld Lang Syne winless in six starts in 2014, which is the lone knock against him.

Sailor’s Revenge (6/1) lost by a nose to Bartolome (20/1) November 17 in a fast allowance race where both runners earned a 98 Beyer Figure.  The sloppy track may have aided Bartolome, while Sailor’s Revenge has recorded triple digit Beyer Figures in the past on fast dirt, and appears to be rounding back into form.