$75 K Blue Light Stakes Under The Lights at Delta 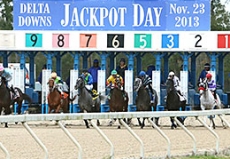 Friday night action January 8 at Delta Downs includes the $75,000 By the Light Stakes for three year-old fillies in a seven furlong tilt on the main track.

The Michael Stidham-trained Princess Kennedy leads the field of nine as the 9/5 morning line favorite. Princess Kennedy (2-2-0 in 7 career starts) ran her first four races at Emerald Downs including a win in the Barbara Shinpoch Stakes before being sent to Stidham’s barn. Stidham aimed high with the filly, running sixth in the Grade 2 Pocahontas Stakes and ninth in the Grade 1 Alcibiades before getting some much-needed class relief with a second-place effort in the Letellier Stakes at Fair Grounds.

Flashy Appeal is the second choice at 7/2 on the morning line. The Scott Gelner trainee finished third last out in the Letellier Stakes December 19 to close an active two year-old campaign that saw the daughter of Flashy Bull win 2 of 9 starts. Since breaking her maiden in career start number four, Flashy Appeal won the Evangeline Downs Starlet Stakes and finished off-the-board in the Happy Ticket and My Trusty Cat Stakes. Jockey Steve Bourque will be aboard breaking from post 5.

Go No Go (4/1) hails from the always-dangerous barn of William Brett Calhoun and will break from the rail following a seventh-place finish in the Trapeze Stakes December 13 at Remington Park. It was the filly’s first finish out of the money in five career starts. Go No Go won the Slide Show Stakes and finished second in the Oklahoma Classic Lassie Stakes in her previous two efforts.