7 Derby Hopefuls Set to Go in Robert B. Lewis 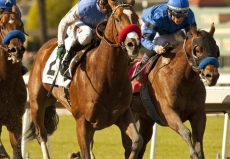 The 78th running of the Grade 3 Robert B. Lewis is part of a stakes-packed card February 6 at Santa Anita as a field of seven is set to contest the mile and one sixteenth event in a Kentucky Derby points qualifying event.

Mor Spirit is the 8/5 morning line favorite for trainer Bob Baffert after capping his juvenile campaign with a grade 1 score in the Los Alamitos Furturity. Mor Spirit has worked steadily for his return, and Baffert connects at an impressive 21% clip with runners returning from layoffs between 31 and 60 days. Regular jockey Gary Stevens will take the mount breaking from post 5. Mor Spirit won has won 2 of 4 races in his career to go with two second-place finishes and should be able to work out a comfortable trip tracking the early speed.

I Will Score brings plenty of zip

I Will Score (5/2) is the early speed in question as the stretchout sprinter tries to carry his speed around a route of ground following two winning sprint efforts to begin his career. Trained by Jerry Hollendorfer who hits with 16% of his sprint to route runners, I Will Score seems assured of making the front as the talented colt won both of his sprint efforts in gate-to-wire fashion, posting impressive fractions of 21 flat and 43.1 last out while winning a six and a half furlong race against $80,000 optional claimers.

Baffert will also saddle 6/1 shot Let's Meet in Rio who has shown a good closing kick in his last two starts. The slow-breaking son of Flatter will benefit from a fast, contested early pace and should be rolling late again under jockey Kent Desormeaux.