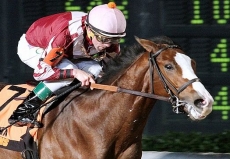 On Saturday, Fair Grounds will host the 30th running of the $60,000 Woodchopper Stakes. Restricted to three-year-olds, the race will be contested at about one mile on the turf and has drawn a field of ten.

Highball has been installed as the morning line favorite at odds of 3-1 for trainer Wayne Catalano. Purchased for $250,000 as a yearling, the bay son of Lemon Drop Kid has won two of his six starts and will be trying to earn the first stakes win of his career. He was fourth last time out in the Commonwealth Turf (G3) at Churchill Downs. James Graham will be aboard wearing the pink and black silks of Gary and Mary West and they will break from post two.

Rise Up trying to prove he can be effective on turf

Tom Amoss will saddle graded stakes winner Rise Up as the second choice at 4-1 on the morning line. A sophomore son of Rockport Harbor, he has won five of his twelve starts and will be making his second start on turf. In his only previous attempt on the grass in the Centaur Stakes in July, he was eighth. He was third against optional claiming company at Churchill Downs last time out and will have Brian Hernandez, Jr. aboard from post position three.

Aztec Brave (FR) going for back to back wins

Also in the field at 8-1 on the morning line is Aztec Brave (FR) for trainer Joe Sharp. After beginning his career in his native France, the bay colt made his stateside debut in June with a runner-up effort at Churchill Downs. He earned his first North American victory last time out with a front-running victory at Fair Grounds and will be trying to earn his first stakes win. He has had a bullet workout since then and will have Miguel Mena aboard from post position four.