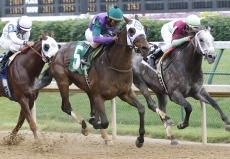 On Sunday at Fair Grounds, the featured race is the 50th edition of the Tenacious Stakes. The mile and seventy yard stakes race has drawn a field of ten colts and geldings.

Agent Di Nozzo headlines the field as the morning line favorite at odds of 7-2 for trainer Steve Margolis. A five-year-old gelded son of Ghostzapper, he will be making only his third start of the year. After a fourth-place finish in the Louisiana Stakes in January, he went to the shelf for ten months and returned to run second in the Delta Mile last time out.  Fourth in the Tenacious Stakes last year, he will get a rider switch to Miguel Mena from post position four.

With Grand Contender a likely scratch after winning the Buddy Diliberto Memorial on Friday, Fordubai looks to inherit the position as the second choice on the morning line at odds of 5-1. Trained by Greg Geier for owner and breeder James Tafel, the multiple stakes winner is trying to improve after finishing seventh in the Hawthorne Gold Cup (G3) last out. Robbie Albarado, aboard for his win in the Louisiana Stakes in January, will be back aboard from post two.

Also in the field at morning line odds of 8-1 is Rocket Time who will be making his stakes debut for trainer Al Stall. Purchased for $150,000 as a juvenile, the bay son of Tiz Wonderful has won three of his five career starts. He comes into this race off of back to back victories including a front-running score as the favorite at Churchill Downs last time out. Calvin Borel, aboard for all three wins, will be in the irons and they will break from the rail.