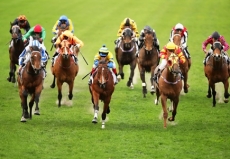 The Thursday, December 18 card at Fair Grounds features the $50,000 Blushing KDS Stakes – a mile and one sixteenth turf event for fillies and mares.

The field of eight is led by a lukewarm favorite in 7/2 shot Eden Prairie.  Trained by Neil Pessin, Eden Prairie finished third last out in the Treasure Chest Stakes November 22 at Delta Downs.  Prior to that effort – a route on the dirt – Eden Prairie was primarily used as a turf sprinter, earning multiple placings in graded stakes company as well as a runner-up finish in the grade 2 Lexus Raven Run Stakes in the fall of 2013 on the Polytrack at Keeneland.  The five year-old daughter of Mizzen Mast has 5 wins in 19 career starts for earnings of $313,495.  She projects to be on or near the early lead under jockey Florent Geroux.

4/1 second choice Malibu Yankee returns from a nine week freshening for trainer Tom Amoss after finishing eighth an allowance race October 12 at Keeneland.  The four year-old daughter of Malibu Moon has 6 wins in 22 starts for earnings $254,042 including a minor stakes win in the Opelousas last summer at Evangeline.  Malibu Yankee will break from post six under veteran jockey James Graham.

Kitten's Queen has been ultra-consistent

Kitten’s Queen has finished in-the-money in each of her six starts this year for trainer Michael Maker – all against top allowance company at Saratoga, Keeneland, and Churchill Downs.  Kitten’s Queen’s lone stakes try came last year when she finished fourth in the grade 2 Sand’s Point Stakes at Belmont.  She certainly fits against this group and should give another good account of herself.